Barbers are an unlimited source of cultural insight.  Perhaps because they interact with large numbers of people from a cross section of society every day. Quickly, they become experts in every subject from politics to sociology to what the neighbors are doing.  However it comes about, they do seem to be a good barometer of current public thinking (rivaled by taxi drivers, no doubt).

Although I enjoy talking with my hairdresser, I resent wasting 30 minutes each month on a haircut. My hairdresser has the opposite view.  Recently, she complained to me "You should get your hair cut more often, how do you expect me to earn a living wage if you only get your haircut every 6 weeks?".  Initially, I laughed it off as friendly banter.  However, as I encountered similar attitudes by other service providers time and again, I began to appreciate that it is more than a joke.  For example, recently a friend and I shared a cab. We were going in the same direction so after hopping in, we instructed the cab driver to drop me off along the way and my colleague would proceed to his destination.  Much to my surprise (why am I continually surprised after more than 50 years living in Korea?), we were chastised and told that we should take separate cabs, otherwise, how could taxi drivers make enough money to survive. In today's paper, there was an article about a new AI program to help taxi drivers find fares (as opposed to assisting riders to find taxis).  I face this phenomenon all the time.  Recently, I chastised a bus driver for running a red light to which he responded "If we obey all the traffic laws, we will never make any money!".  The city has ordered major box stores to curtail their shopping hours to provide more opportunities to smaller retailers, never mind the inconvenience to consumers. Time and again, the message is that consumers exist to give jobs to service providers! Demand and Supply is the economic imperative, not Supply and Demand.  Adam Smith would be a nobody had he been born in Korea.

"How do I avoid excessive drinking without upsetting my boss or co-workers?  Where are the coolest bars for friends and lovers? What is the best way to overcome a soju hangover?"  As the year-end approaches, we can see ample evidence of the changes in drinking culture in Korea and the stress emerging from generational differences. Social sub-groups are creating their own rules so how you have fun depends on who you are drinking with.

Statistics suggest that alcohol consumption is static but looking closely, we can see that the types of alcohol and how it is consumed are undergoing dramatic change.  More people choose to drink at home (home-sul) or on your own (hon-sool) than ever. The changes in drinking culture seems to reflect the company culture or, perhaps, the other way around. It is complicated!

Thursday evenings after work are the busiest time at bars and restaurants for drinking with friends or co-workers - whereas it used to be Fridays. Work-life balance is more important than ever and people prefer to keep Friday afternoons/evenings free from any social engagements because it is the beginning of the weekend.

Another dramatic change is that the single group norm is being supplanted by individual preferences. The younger generation who reject the social norms set by their fathers' generation choose what they want to drink, how much to drink, and what snacks to eat while drinking.  This includes the option of drinking at home or on your own. 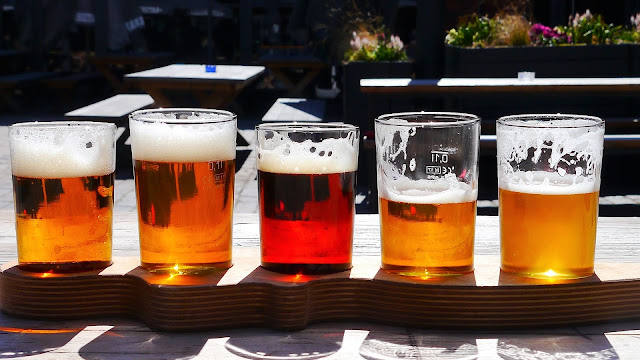 Alcohol consumption is diversifying as it is no longer required to go along with the crowd. According to "2018 Alcohol Statistics" by the Ministry of Health and Welfare/ Korea Health Promotion Institute, consumption of traditional soju decreased slightly in the last three consecutive years from 955,507 kl (2015) to 945,860 (2017), whereas imported beer increased from 170,919 m/t to 331,211 m/t in the same period.  High end distilled soju increased from 954 kl to 1,857 kl, more than doubling in the 3-year span. We see the market diversifying within each category while the total market size remains unchanged.  Bars featuring more than 100 types of makgeolli, (a traditional fermented rice drink beer) have been drawing consumers in their 20s and 30s.  The relatively low alcohol content and compatibility with various side dishes enhances its appeal.

At the work place, respecting individual tastes and preferences is perceived as an important characteristic of the cooperative co-worker (according to a mid-30s former co-worker now imbedded in a Korean firm).

Most of the booths were related to Furniture Fixtures & Equipment (FF&E) and some aspects of Design & Architecture. There were also numbers of Operational Support Equipment (OS&E) related booths.

One of the trends which can be observed not only in the hotel industry was the enhancement of technology, and IT sectors used in industries. 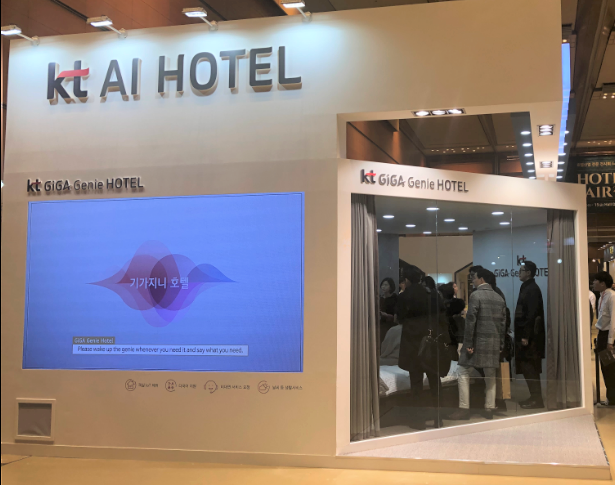 KT GIGA Genia Hotel AI system is a total control system which can be controlled by voice recognition or touch screen. The visitor would be able to control everything with their voice or with a fingertip with less human interaction.

DaeBul Hotel was the first Korean hotel which opened in 1883. The hotel industry in Korea has been over 130 years, but the Korean brands were not able to firmly spread their wing internationally nor establish stability on their home ground. The hotel industry had a boost in the 1988 Olympics which allowed them to grow. To keep the ongoing sales, the hotels started to use Online Travel Agencies (OTA) to bring in large groups of tourists. This demand leads to the OTA market to become mainstream.

One of the hot issues for the hotel industry is the increase in minimum wage which increased by 16% in 2018 and expected to increase by 10% in 2019. Hotels are searching for solutions to reduce cost and at the same time, the AI systems are coming in the spot line.

Even with contrary views, international brands and picky Japanese brands started to enter the Korean markets recently. We believe this shows that global experts believes the Korean market has a bright future.

The international customers pool in 2018 changed. Asian countries still cover 80% of the pool, but the composition has changed. Starting from 2000, the Chinese were the largest and most spending tourist groups, but after THAAD issues elevated, Chinese tourist decreased dramatically. The number is slowly recovering, and the overall Asian visitor percentage is still stable due to the increase of tourist from other Asian countries.

The domestic customers pool also showed some differences. An increase of singles between their thirties and forties and small size families for a Staycation, which is a preference to stay close to the city during holidays instead of long-distance trips.

The Fine Dust & Air Industry Fair was focused on fine dust and products related to the issues. The majority of the displayed products were consumer products related to filtering fine dust. There were various types of household air cleaners from standing desk size installations and combined with the air-conditioning systems.

LG had the largest booth which was hard to miss. The products were all air cleaning related and for consumer use. Their exhibition design was similar to a household providing all their products with air cleaning functions, which includes air cleaners, air-dressers (Steam closet system), air-condition systems, ceiling fans and built-in environment systems which have an air quality system. 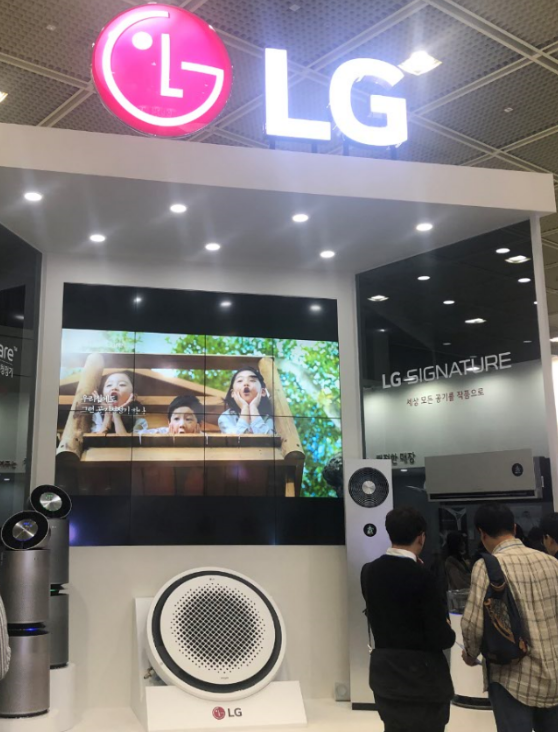 Not all the products were specified for the consumer market. There were also industrial air cleaning systems, filters for air cleaning devices and air quality monitoring systems attracting visitors.

There were some government agencies’ booths which helped provide information on new technology which can be applied in the air industry and air quality control market. An interesting product from the booth was a combination of the fashion and fabric industry, providing cloth which protected consumers from polluted air. The Korea Agro-Fisheries & Food Trade Corporation also had a booth where they were providing information regarding natural air purifying plants.

Unlike most general electronics such as refrigerators, air conditioners or washing machines, air purifiers were considered to be unnecessary until recent changes in environmental conditions. Within the past years, the number of air purifiers and large electronic company air purifier advertisements has increased remarkably.

The increase can be simply because of the increase in life quality in which air quality is a sub-sector. However, Korea has recently experienced a number of issues that have raised the awareness of air quality. There have been incidents like MERS. The outbreak of MERS in 2014 caused 38 death and led to changes in the air quality control regulations. Since 2012, fine dust has been a national crisis. People were depressed and devastated by the polluted air.  Because fine dust may cause critical damage, this was the main driver of the growth.

The market in Korea for air cleaners is characterized by steep competition. The major, domestic electronics companies have dominated the high end of the market while at the low end, imported products are constantly trying to climb up the ladder. However, the air cleaner is not the only product in the air industry. 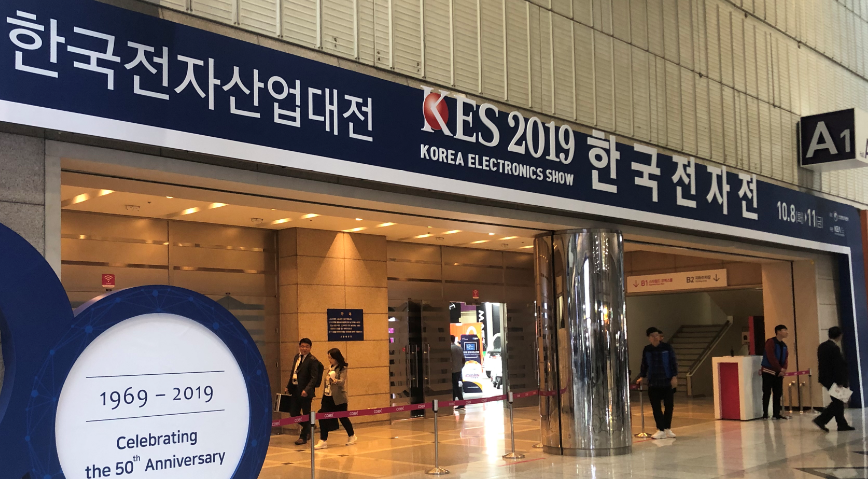 Organized by the Korean Electronics Association and hosted by the Ministry of Trade, Industry and Energy (MOTIE), KES2019 was first launched in 1969 and celebrating its 50th anniversary. KES2019 is a show which has grown with the Korean electronics industry and is part of its development.

As Japan has restricted exports to Korea, the Korean government has been focusing on the localization of essential parts and components. To be independent in specific markets the government is supporting companies with specific technology; which many exhibited at KES2019.

Even though the government has been assisting the small and medium-sized companies the attraction of the show was fixated on the major players of the industry. Samsung and LG electronics were centered in the middle of the show and were the main attraction.

Pavilions for exhibitors from abroad were provided, which mostly was from East Asia.

In one of the halls was the Smart Biz Expo which was one of the sub-sections of the show related to the smart manufacturing facilities. They showed all different types of products from F&B to consumer products which seemed less related to the KES2019.

The report by the Korea Electronics Association shows that China is leading the global market with the U.S., Japan and Korea while Vietnam and India are growing rapidly to challenge the leaders in the near future. In 2018, the global market share of electronics for Korea was 8.8% with an average yearly growth rate of 9% since 2013. Within the domestic market, 77.3% of production was electronic components followed by radio comms & radars, computing and customer products. 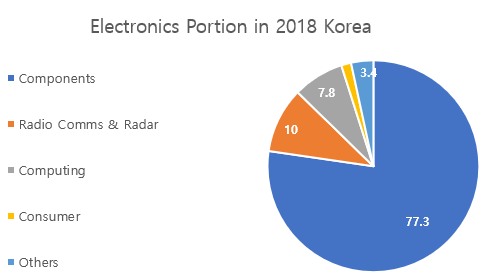 Korea has a strong electronics industry which has been developing as one of the top exports that the country can offer. To penetrate the market which is a red ocean it will be time and cost consuming and most importantly require a partner who can effectively promote the company's capabilities.